Some Africans have good reasons not to condemn Russia over Ukraine

by kamalben_tunsiaMarch 25, 2022 0 comments on Some Africans have good reasons not to condemn Russia over Ukraine 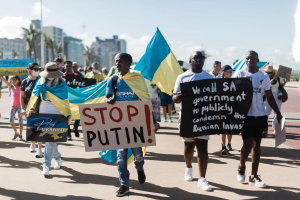 On 2 March, 141 UN member states voted to “condemn” Russia’s “special military operation” in Ukraine, calling it a serious violation of the UN Charter. Thirty-five countries abstained or did not vote at all, among them seventeen African nations, which is another indication of increasing Russian influence in the continent. Uganda, for example, is supporting Russia. The majority of African leaders still remember the Soviet support for independence struggles across Africa.

This did not seem to please the US’s ambassador to the UN, Linda Thomas-Greenfield. In an interview published on her country’s UN mission website she said that many African countries saw “abstention as being neutral. And there is no neutral ground here.” She also said that such African states do not seem to understand the situation in Ukraine and that the US must “explain” to them that it is a matter of principle to support Kyiv.

This is, very obviously, a hypocritical US position given that Washington has done much worse in Iraq, Afghanistan and Palestine. For example, during Israeli’s May 2021 offensive in Gaza, the US, three times in one week, vetoed a simple Security Council statement calling for a ceasefire. That Israeli aggression left over 2,000 people killed and injured while thousands more were made homeless. Israeli war planes bombed a building housing international media in an apparent attempt to keep the rest of the world in the dark about its crimes in the besieged Palestinian enclave. On that occasion the US failed to claim the moral high ground and its respect for international law. To try to claim such noble principles over the situation in Ukraine is simply to expose its double standards.

Criticising African nations for not condemning Russia is both a hegemonic and a one-sided view in which the US, as usual, does not condone any opposition at the UN. It is also disrespectful of the sovereignty and independence of those nations in making their own policies based on their own interests.

OPINION: Keep the Palestinian struggle out of Putin’s war in Ukraine

Moreover, not condemning Moscow does not mean support for its naked aggression against Ukraine. Why should African countries have to take sides? Why can’t they be neutral and call for peace?

Russia’s influence in Africa has, without doubt, been on the rise. Moscow is today linked to many African counties, such as Egypt, South Africa, Mali and Algeria, through trade and military supplies. Many African states import large quantities of grain from Russia as well as Ukraine. South Africa, for example, imports 34 per cent of its grain needs from Russian and 4 per cent from Ukraine, while Egypt imports over 60 per cent of its wheat from Russia. Cairo is also a big buyer of Russian weapons. Mali has been receiving military assistance from Russia’s Wagner Group, a private paramilitary company with which the Kremlin denies any links.

Moustafa Troare, a Paris-based Malian university lecturer, told me that Russia is becoming more important in Africa than some former colonial powers like France are. He pointed out that Russia does not “have any colonial history” in the continent. Troare added that the West seems to forget the fact that, in international relations, “Your enemy is not automatically my enemy.” He cited his country’s military links to Russia as being important for both sides, and pointed out that despite the war in Ukraine, the Russians secretly received the Malian defence minister recently. Some media reports say that the minister arrived in Moscow via Istanbul on 6 March, apparently for talks about the military help that Mali gets from Russia. Some Wagner Group personnel are already in Mali to help it in the fight against jihadists and secessionists in the north of the country.

Herman Cohen, a former US Under-Secretary of State for African Affairs, played down the issue of a conflict between the US and some African countries at the UN over the Ukrainian war. He told me that African countries see the invasion of Ukraine as “unprovoked” and that some abstained from voting because “they are receiving military aid from Russia.” He also emphasised that the issue is not causing any friction in relations between the US and those African nations. Cohen, though, rejected the idea that the war in Ukraine is more of a confrontation between Russia and US-led NATO.

OPINION: Senegal says no to racial profiling and neo-colonialism

Could the US impose punitive measures on the African countries which failed to join the condemnation of Russia? Cohen thinks it is unlikely. The US and its western allies have already imposed sweeping and severe sanctions Russia and Russian individuals, including the banning of sportsmen and women from international tournaments. Neither the US nor its allies have, so far, said what measures they will take against countries which violate their sanctions. The sanctions are not supported by any UN resolutions, so other countries are not obliged to enforce them.

In the background to all of this is the fact that some African countries were angered by Ukrainian attempts to recruit Africans to fight against the Russians. Senegal summoned the Ukrainian ambassador to explain a post on his embassy’s Facebook page calling for volunteer fighters to join the battle to defend Ukraine. A Senegalese foreign ministry statement made it clear that the ambassador “verified” the legitimacy of the post and was asked to remove it. Senegal is one of the African nations which abstained from condemning Russia at the UN. Ukraine has been calling for foreigners to go there to fight Russia and many have apparently answered the call. French, British and Polish citizens are known to have arrived in Ukraine to join the fight. The recruitment of mercenaries and volunteer fighters is illegal in many countries, including in Africa.

OPINION: The inherent racism is clear when the world speaks of Ukraine

The irony here is that hundreds of African students in Ukraine faced discrimination and abuse as they tried to flee the country after the Russian attack. Arrey E Ntui, a senior analyst with the International Crisis Group NGO, tweeted on 28 February that “there should be no place” for violations of human rights against “African people” caught up in the Ukrainian war. On the same day, the African Union also expressed its concern about the bad treatment of Africans trying to leave Ukraine.

It may not be what Washington wants to hear, but some Africans have good reasons for not condemning Russia over Ukraine.

The views expressed in this article belong to the author and do not necessarily reflect the editorial policy of Middle East Monitor.